“Pathlight has been a total blessing. 360 degrees to make sure we succeed, so there’s no reason why we shouldn’t be successful,” states Rosa. They are excited at the concept of developing their “signature sauce”!

This is a story about two hardworking souls, paths that were destined to cross, raw eggs, a hot dog cart, and the Pathlight Kitchen Culinary Training Program!

Rosa was raised in Sanford, Florida, with a dream of becoming a journalist. Life, marriage, children, and divorce took her north to New York and Massachusetts; and her education led instead to the Information Technology field, primarily serving customers and solving problems. With a longtime goal of returning to the south, she moved back to Sanford in 2014. And though she still wanted to write, she returned to serving customers through IT, call center and accounting positions.

In August 2018, she was involved in a major accident on I-4. “It changed the course of my life. I couldn’t go back to work,” she says. She needed surgery, which the other driver’s insurance did not cover. “It left me hanging…trying to pick up the pieces…depending on unemployment.”

Kim hails from Cleveland, Ohio. He was a contractor, who “loved rehabbing houses” and is grateful that “God blessed me with transferable skills.” His path led to a number of cities. Following his brother to St. Louis and then San Antonio, he worked and learned in both cities. His dream was to be in Atlanta for the 1996 Summer Olympics. Not only did he get to Atlanta, but he stayed, got married, and opened a café!

Family responsibilities led Kim to close the café and move to Tennessee, where he became a diesel mechanic. When his marriage ended, his life made the circle back to Ohio and contracting. Employment with a large hotel chain, a transfer to Florida, and a Human Resources mix-up left Kim jobless in Orlando.

Thankfully, he was finally able to find a job that combined his food, beverage and construction talents. “Thank God for transferable skills,” he reiterates. He was able to move from cheap motels into a Sanford apartment…right next door to Rosa. After his dog Gigi barked “hello”; they began talking about business; and bonded over removing the “white stringy thing” in raw eggs. The rest, as they say, is history!

Fast-forward to Kim finding the Goodwill Job Connection Center, landing a maintenance position at a prep school, and then badly injuring himself on the job just a few days before Rosa’s August accident. Now living together, they found themselves in the midst of financial hardship and medical issues and wondered, “What can we do?”

That’s when Kim “saw the hot dog cart online…I thought this would be a great idea,” he says. Thinking about their situation, Rosa wasn’t so sure. “Why would we spend money to do this when we were in a bind?” Yet, she researched the concept and realized, “It’s not such a bad idea!” They bought the hot dog cart! What now?

The timing was perfect! They saw a flyer for 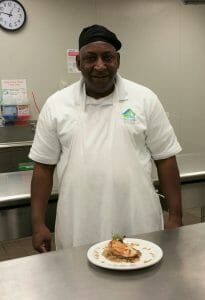 the January 2019 Pathlight Kitchen Culinary Training Program and showed up on the first day of class to apply. They spent the next 12 weeks learning, cooking and earning the food safety handler and allergen certifications. They graduated in March.

“We got more than a plateful. It was a great course. Not to mention that all this was free. “Chef Esteban taught us the proper way to de-bone a chicken, filet a fish…what ingredients to put in first,” says a grateful Rosa. “He wasn’t just a talker. He was hands-on…the field trips, so you’ll have an understanding of what we’ll be doing before we get into the kitchen.” 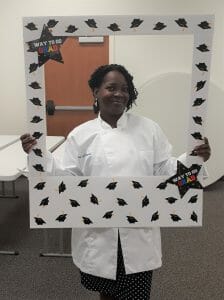 “The Chef went above and beyond to make us knowledgeable ,” adds Kim. “Financial planning, assets, liabilities, plugging holes where you lose money. You name it, he went through it. He shared a lot of his own experience. We really did learn a lot. He gave a lot of extra tips to make sure we’re successful.”

“Pathlight has been a total blessing. 360 degrees to make sure we succeed, so there’s no reason why we shouldn’t be successful,” states Rosa. They are excited at the concept of developing their “signature sauce” that Chef says will make them “stand out above the others”; and Kim literally dreams about specialty hot dogs and sauces, awakening with creative ideas.

"Shannelle taught us a reminder…life skills. What hit me most was being consistent. And to write things down. (Then) you see it. If you write it down, most likely it’s going to happen,” Rosa says appreciatively.

This congenial couple has many tasks and much “writing down” ahead to accomplish their dream. They plan to earn Food Manager Certifications shortly and are embarking on a business plan. The cart must be inspected, licensed and situated by the City of Orlando; and the signature sauce and must be created! They appreciate the advice and assistance available to them. “The Chef said his door is always open,” says Kim, “and Miss Sharon from Goodwill will help with the business plan.”

Rosa and Kim must tackle their medical issues first, which gives them the needed planning time. “It’s not a rush thing,” they agree. “When it transpires, we’ll be ready. “It’s not going to be an ‘if,’ it’s going to be a ‘when.’”

And WHEN they start serving their signature recipes, we’ll be there to write the next chapter in their story!