“I wish more people would find this opportunity. What a great opportunity here; there’s great structure… In Brazil, this would be an expensive school. Learning to cook only improves your life!”

Especially in this day and age, one reads about those who moved to Florida from another part of the world to live the “American Dream,” believing life here is better than anywhere else on the planet.

Once planted here, many realize issues such as language barriers, lack of education, the cost of living, and a low-wage job market can be major stumbling blocks to success. That’s definitely where determination, education and often a stroke of luck come into play!

Luiz’s mom wanted to give him the opportunity to live in this country, as her brother had been an exchange student and she had family here. When they arrived from Brazil, Luiz was a high school student and “lucky enough to know more English than anyone else.” Nonetheless, he was required to repeat his junior year due to two very different school year calendars and systems.

Though he learned English well and graduated, and his mom worked hard to support them, college was out of the picture. Luiz instead began to work in a host of low-wage jobs in the in the hotel industry over the years which, he now realizes, helped him develop customer service skills and improve his language abilities.

Moving on to a job at a go-kart track and unsettled career-wise, he was very determined to “give service” and to volunteer his time. “I learned the language. I do my part for the community,” he says. (Ironically, Luiz volunteered last year with The HIVE, helping to assemble pallets and plant our Restore vegetable garden.)

Volunteering his time, in fact, is what brought Luiz to Pathlight Kitchen and the Culinary Training Program. While helping one of the chefs (who was also his mother’s friend) to arrange and clean equipment, the tables were turned and he decided he “wanted to learn from her” and take the free cooking class. “It was an opportunity that just came up,” says Luiz. Starting with Dining Room and Table Service Skills sessions, he became excited and realized, “This was a way for me to put on paper all the experience I have (in hotel banquet rooms). It gives me a certificate and more of a foundation.”

When the 12-week culinary classes began in July 2018, Luiz was fearful of failure, but dove in anyway. “The kitchen for me?” he thought. In fact, he had no expectations; he only wanted to finish the class. Those thoughts seemed to change pretty quickly, however. “Once you figure it out…it was just going to be a win-win…I never thought of myself as a chef. But I’m thinking about my future…a wife and kids, my mom.” 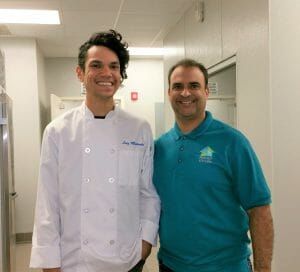 player,” says Chef Esteban Torres about Luiz, of whom he is very proud. “He was so grateful for the class that Luiz and Esteban edited2 he stayed to mop and take out the trash. He never says ‘no.’ It (the kitchen) wasn’t his interest in the beginning. Little by little, he started feeling more confident, involved and interested. I enjoyed seeing him get a job.”

As a stroke of luck would have it, Luiz’s culinary program graduation, his loss of the go-kart job and an opening for a prep cook in a good restaurant collided within two weeks of each other (and his birthday). “I was freaking out! Everything just fell from the sky. The timing was perfect.” He’s been working at the restaurant ever since and is in high demand for extra hours because of his knowledge and work ethic. “It’s great to be in the kitchen; that’s where you start; that’s how you progress; and I’m learning.”

Now that he’s on a career path, Luiz has encouragement for others. “I wish more people would find the opportunity. First of all, it’s free. What a great opportunity here; there’s great structure…there’s so much here. In Brazil, this would be an expensive school. Learning to cook only improves your life…makes you more independent. It’s a solid career…an industry that’s been going forever. We’re here to learn what’s right, so you can do it and tell others how to do it.”

“The fact that I was able to get a (good) job and am finally able to pay for things…it’s a career!” That realization seems to have provided some breathing space for other creative pursuits, such as creating unique furniture and art display structures from pallets, computer programming, and singing in the Bach Choir.

We know this young man is on the right path to a bright future and we’re happy to have shed a light!