“Be happy you have a place, because you never know when you won’t… You guys have done an amazing job by taking an old motel and making it nice and clean. You have made it…to where it can be called an apartment complex.”

John recounts the stages of his life story with a deep mix of emotions: pride, gratitude, embarrassment, resignation and hope.

Born with a “wonderful head start” into a prominent Chicago publishing family, his love of relatives and friends is unmistakable as he shares a scrapbook of time-honored memorabilia. Meaningful pictures from his mother grace the walls of his efficiency in Pathlight HOME’s Maxwell Garden Apartments and mementos abound. “I keep my memories,” he says.

Front and center in John’s mind are the family vacations to Orlando all those years ago, especially one in 1976, during which they stayed in a nice Holiday Inn on Orange Blossom Trail. You guessed it; that long-ago motel was refurbished and is now his home. The irony is not lost on John.

As a young man, his goal was to become a teacher; but John’s inner salesman took over. Starting his career in Chicago, John moved to Florida to be with his parents in 1986. That was the first of several moves back and forth over the next 10 years, as his parents’ health deteriorated. His life was quite active during that period, to include two years as a Police Officer in Chicago, time-share sales in Florida, a marriage, a stint in Michigan, and home ownership.

John also began to suffer emotionally, resulting in “huge anxiety attacks.” Adding to his mental state, he and his wife lost a child. That devastation affected their marriage irreparably; and the resulting divorce left him pretty much penniless.

Back in Florida, John tried to recoup, albeit with renewed anxiety and new phobias. Thanks to friends, he was able to earn some money through his passion for cars and to apply for disability benefits. He also had a place to live…until he didn’t.

Reduced to living in his car, John learned about the Homes for New Beginnings Program at Maxwell Garden and moved there in September 2015. The irony of his history hit him hard. “I could cry,” he admits. “I was educated, I worked… they (his parents) left me the majority (of their estate); and what bothers me the most…I never thought I’d live in an abandoned motel where we stayed…”

“I have to live nicely. They let me do that,” he 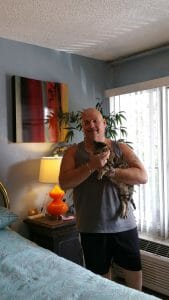 says about touches in his homey apartment. “When you have to reach up to touch bottom, you are so appreciative you have a wall to paint blue. I was spoiled rotten and not humble. Maybe I needed the humbling,” he reflects. “Be happy you have a place, because you never know when you won’t…treat it with pride. You guys have done an amazing job by taking an old motel and making it nice and clean. You have made it…to where it can be called an apartment complex.”

John can’t say enough good things about his Case Manager. “Miss Gail has been a very big help. She honestly cares; she’ll give of herself in a heartbeat.” And of the rest of the staff he comments, “They really work hard….they work this place with pride. If something goes wrong, you can call at 11 am and by 1:30 it’s fixed.”

An industrious, fastidious and friendly man, John has three things foremost on his mind these days. Though he feels safe, he still dreams of having his own small home, is extremely apprehensive about impending knee surgery, and is upset that trusted friends have left town. As one who finds a way to keep going, he’s taking action on these life challenges through buying/selling cars for his nest egg (celebrating each sale with oatmeal cookies for the staff); seeking counsel from his Case Manager; and realizing there are other like-minded people out there to befriend.

“I want to try to get ahead again,” says John. With his stalwart determination, we have no doubt he will!