“I’m still getting used to it. I have a new bed, a rug; I’ve been buying stuff,” he says cheerfully. “I want it to look good! There’s a sense of pride. The opportunity is there, but you’ve got to want it.”

Allen reminisces about growing up on a farm in Tennessee with his parents, graduating high school in Indiana, and having had “a pretty good life until the year 2000.”

A hard worker who was skilled in heavy mechanics and employed in the construction trade, he got married at age 24. A financially comfortable couple, they bought a “brand new home” in 1987. Unfortunately, their union didn’t last and they divorced in 1989. “My drug of choice is alcohol,” he admits. “That’s probably the reason it didn’t last.”

Allen remarried two years later. “For three to four years, all was fine. Then, she got into drugs.” Between his drinking and his wife’s drugging, “It got so bad, she didn’t pay the bills or the mortgage,” and they nearly lost the home he’d bought with his first wife in 1987. Their reprieve came with a second mortgage; however, once that money was spent, the bank foreclosed on the house and his wife left. His life came crashing down “All at once!”

“I lived here and there. All I had (was) my Harley,” Allen recalls. Moving from place to place, his continued drinking resulted in several DUIs and the loss of his driver’s license. Then, he got laid off from his steady job in transportation and was hit by a car while riding his Harley. Remarkably, Allen still continued to work at odd jobs. “I’d work for anybody who’d pay me. I can do about anything,” including rebuilding alternators and starters and heavy construction.

Allen’s nomadic life ended with a move to the woods in 2002 with “no car, no nothing…and I sold my Harley.” A trustworthy guy with a lot of skills, who didn’t drink on the job, he started picking up work at the labor hall and making money. He also began working for several families in Winter Springs, one of which still employs today. As to his “home” in the woods, “I had a nice little set-up.” People even told him he “had it made!”

His heavy drinking finally caught up with him, though, causing peritonitis with impending cirrhosis of his liver. Fortunately, Allen got help through the Hope Team from Healthcare Center for the Homeless, who met him in the woods. They took him to Orange Blossom Family Health and Winter Park Hospital for his medical needs. They also referred him to Pathlight HOME’s Safe Haven Program at Maxwell Garden. That was in March 2015.

“I met Rotaya. (She) will do anything to help. 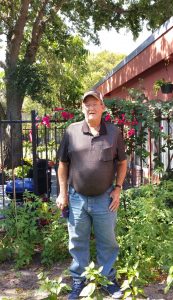 If you even mention it, she’ll make it happen,” said Allen of his Case Manager. ”But you have to put your own effort in it. She’ll find a way to give you the opportunity.” With Rotaya’s help, he set goals and accomplished them rather quickly, such as getting new teeth, eyeglasses and his Social Security benefits.

His goals for the last year have been to get back his drivers’ license and buy a truck; and he succeeded! As well, he wanted his “own place,” and has recently moved from the bedroom in Safe Haven into an efficiency in Maxwell Garden’s Homes for New Beginnings Program.

“I’m still getting used to it. I have a new bed, a rug; I’ve been buying stuff,” he says cheerfully. “I want it to look good! There’s a sense of pride,” says the man now loves tending the community’s vegetable garden just like the farm on which he grew up. “The opportunity is there, but you’ve got to want it…”